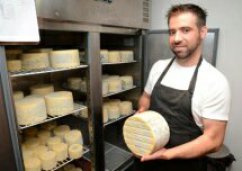 In addition to fulfilling his roles as chef, brewer, lecturer, father and farmer, our landlord Matteo has been perfecting the recipe for Bircher Blue cheese for a little over 10 years! Having grown up in Sardinia where being self-sufficient is the norm, Matteo was inspired by his grandparents' talent for cheese making and so embarked upon a Derbyshire cheesemaking journey himself.

Starting in a rather large pan in our kitchen, Bircher Blue slowly developed and became refined, finally becoming the rich, buttery cheese we enjoy today. We have long since left the 'big pan' method behind and now produce our cheese at Woodthorpe Manor farm in Tupton, using milk from Roger Marriott's herd there. Roger comes from three generations of dairy farmers and looks after his cows like a doting father! Fed on the best home grown grain, the cows are milked, the milk pasturised and fed into our cheese making vats within the hour, ensuring optimum quality and freshness.

Bircher Blue cheese is a creamy, sweet blue cheese with a richness only made possible by using the best quality milk.

Our cheese is usually available to buy from the bar and from: